Mojito (now Charlie) was adopted in 2007, and since then, he has been a great companion AND therapy dog! Thank you, Barbara, for adopting this boy and providing this great pup-date. And Happy Birthday, Charlie!

“This Happy Tail is long, long, long overdue. On March 18, 2007, Jim and I took home a 3 month old puppy known as Mojito to the people at Heartland. As a Heartland volunteer, I had seen Mojito and his two sisters numerous times. I thought he was really cute but they were listed as border collies. We were looking for an adult dog to train as a therapy dog. We had a 3-year-old Australian Kelpie and did not want to have to deal with the high puppy energy of a herding dog. On March 17, I had the great fortune to take Mojito off the Rainbow van at the Pet Expo and then spent the rest of the morning with him, walking and greeting people. I very quickly realized that he was not a border collie. He was so calm and sat patiently waiting for attention from anyone wanting to pet him. I knew we had our future therapy dog, renamed Charlie. Our best guess is that he is part Pointer, Great Dane and he has black lab ears.

Charlie trained with Rainbow Animal Assisted Therapy to work with both Jim and me. He started doing therapy work when he was one. He has listened to hundreds of children read to him at library Read to the Dog Programs at over a dozen different libraries. He also learned many skills and games that special needs children could do with him. We also did numerous special events and he helped teach Dog Safety Programs and he always remembers not to “take a treat from a stranger.” He has also comforted numerous patients on their bed or by they side at Advocate Lutheran General Hospital. Until Covid, Charlie was still working some library programs and at the hospital. He misses going to work and seeing people.

The high light of Charlie’s Rainbow career was getting to go the Wrigley Field on June1, 2016 to help destress the players on the road to their World Series victory. He was on national TV on the ESPN pregame show.

Charlie also helped me a multitude of foster kittens from Heartland. With new kittens, he would lay on the floor and wag his tail and let them bat at it. As the kittens got braver, they would climb on him or go for rides wrapped around his leg for tours of the house.

Charlie will be 14 in a few weeks and we cherish each day he is with us.” 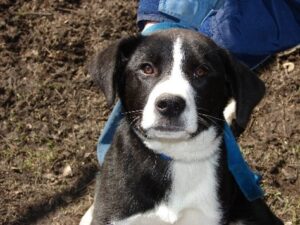 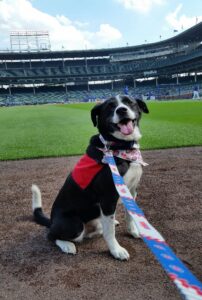